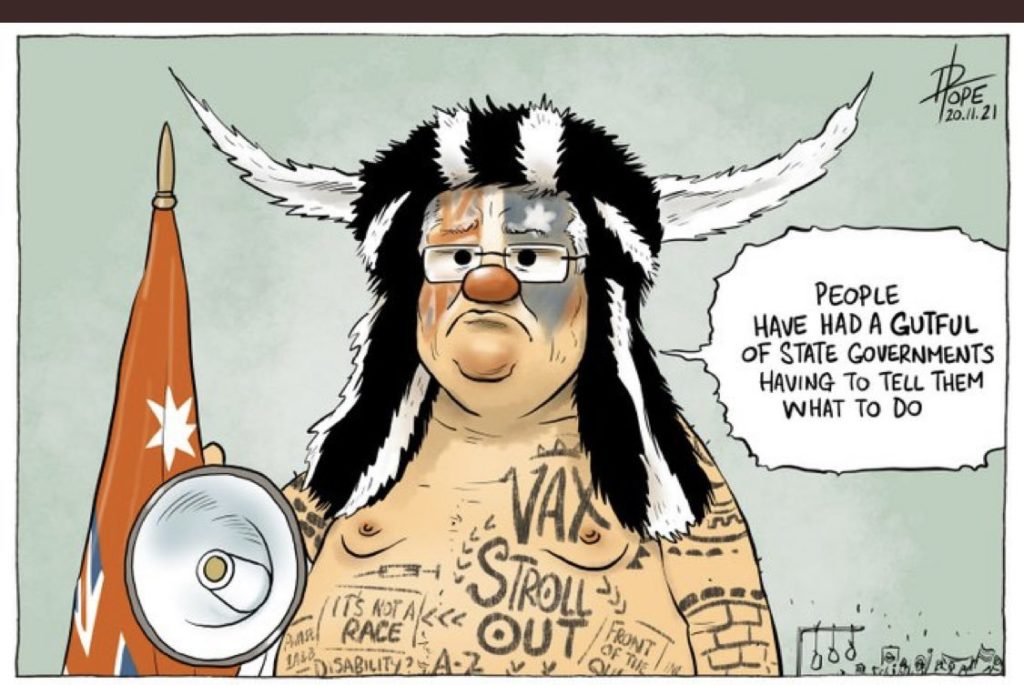 Is that a skunk hat?

Shorter edition as promised… not by much…

US market carries on… seemingly endlessly. The S&P up 27% year to date.

Ord Minnett are calling it a boom. Hard to argue with Jobless Claims at a 52 year low. Exports up more than 25% yoy (and now above pre-Covid levels). Orders up, spending up, and… inflation up.

Strangely enough, you would have thought Powell’s re-appointment, and hawkish comments, may have pushed yields lower with possible early hikes. Two full hikes now priced in for 2022.

Maybe bond traders are more concerned that this transitory inflation is not actually transitory after all.

One big element of this inflation (and likewise true here) is oil energy costs.

Biden got the USA and a few other countries to release some oil from inventory in an attempt to boost supply and get prices down. The 50 million barrels released was the equivalent of 2 days use, so prices actually rose as OPEC laughed at the inept attempt. To be fair, they were absolutely jazzed last year at the onset of Covid when oil was priced at below zero dollars a barrel.

Moody’s reckon the USA is in recovery mode and Australia is in expansion.

A bit harsh, I reckon. Paint the USA green I say.

What does all this mean for Australia?  If we are growing quicker than the USA (we are not), then watch for higher rates for us in 2022. On that, I am not convinced yet.

We need to keep chippin’ away though.

As an interesting aside, the Republicans are incensed by the radical left, a.k.a. the Democrats, thinking about introducing a bill that will give US workers 4 weeks paid annual leave a year – double of current entitlements. They are saying it will cost $4.5 trillion USD over 10 years and will ruin the economy. I must say I was surprised that ‘we’ had it so good. Just took it for granted. In fact, not long after I started work in a very union active 80’s, the push was for a 9-day fortnight for all.

Goldman Sachs did a report this week on Aussie Banks. We have already covered much of where they went, but an interesting chart:

Interesting because their focus was on CBA beating the other majors in growth.

I could hardly see their data, so over-shadowed were they by Macquarie’s growth. Amazing. They do not do these things by accident, so they want to be a much bigger player in Oz.

Which is a nice segway into another ‘challenger’ – Judo Bank.

Judo was established by Joseph Healy and ex NAB senior executive. If you read his book Breaking the Banks you would swear that he floats on a cloud next to JC himself.

They have a very interesting model and the great benefit of no history or legacy from Royal Commission investigations. They fund themselves on the wholesale market via the RBA current TFF and via term deposits (no at-call deposits). They only fund the SME market. They are also attempting to re-engineer old banking to customers – putting people ahead of technology.

They don’t want to be the cheapest and their NIM (interest margin) is up there, but well below ANZ.

They claim to have a slightly different (more aggressive?) approach to lending – where bricks and motor are not the all and everything.

I would be pretty confident that dark blue box above would have a much higher percentage in the 4 majors.

Early days yet, but I met a few of their bankers earlier this month and they are very enthusiastic about the future and stickin’ it to the man.

We broke below 72 cents but bounced back to 72 flat at time of writing – helped by a push higher in iron ore and coal prices after China decided to boost production and electricity. The skies must be clear enough now for the winter Olympics.

For reasons mentioned at the top, the USD looks strong and likely to get stronger. Hard to see our Aussie Battler getting much higher until that trend stops.

Morrison is under the pump big time. Like a team that is getting flogged by 10+ goals each week, he talks a good game but is not delivering. The selectors have the wrong players, who when they rarely get a long kick, seem to do so in the wrong direction. Back pocket players are leaving their man free trying to chase an easy stat.

As Abraham Lincoln said: “No man has a good enough memory to be a successful liar.”

His word salads are getting more mashed up.

This one in his defence of George Christensen, the “Manilla Mauler”:

“Mr Speaker, I would condemn any encouragement by any places in any place that like any person in any place encouraging acts of civil disobedience was a bit is not coming I would participate Mr Speaker. I don’t think I could be any clearer than that.”

More incredible than his lack of lucidity is that Jacqui Lambie suddenly seeming to make sense. I always had her on the same ticket as Pauline H.

Her comment regarding his appetite for religious freedoms but not an ICAC:

“A baby born on the day the government promised a federal integrity commission is walking, talking and getting ready for kindy, being almost three and has ACCOMPLISHED MORE IN ITS SHORT LIFE THAN THE GOVERNMENT.”

It is all funny except Federal Government is supposed to be better than this.

SlowMo must be a slow reader because it seems he and his merry men are determined to take the Trump playbook to the next election.

Fear and division may work but it is high risk. We called out a few weeks ago that Mr Potato Head would ramp up fears of Chinese military action… tick now done.

Step two: attack State ALP Premiers. Well to be fair, that is on-going. But to use vaccines as a weapon is not smart when some 90% of voters have had the jab and thus rightly feel that the last 10% are effectively making it harder for them.

I am not a mandate advocate, but then again I don’t want my pilot pissed when they fly my plane or my cabbie stoned to the bejesus.

So when the Prime Minister uses the Trump playbook, understand that the majority haven’t seen Braveheart.

Mind you, if the sign below is legit, then he is appealing to voters that have the IQ to see his shortcomings.

I leave you with this challenge. Can you let Black Swan know what is THE BEST thing the Coalition has achieved under this term of government. Choices are endless.

The Opposition are yet to reveal any policy of substance yet. They are letting ScoMo self implode first. Probably a safe approach, but some strong alternative may seal the Coalition fate well before March 2022.

CBA and the ANZ are calling for house price falls in 2023… on the back of actual or imminent higher rates. CBA are calling a 10% fall. Big whoop when they expect them to continue to rise in 2022.

ABC and Kohler did a ‘special’ on housing affordability. A few things stood out more than Peter Costello’s chin…

Supply is seen as the key answer. We mentioned in a blog last year just how much land is held by the big developers as ‘land banks’ and how they leak supply out to maximise returns.

Not that I would like to see fertile fringe agricultural land getting the cheap and nasty shit boxes built, but maybe put a ‘unutilised’ tax to these companies that are holding land with no plans.

Stephen Koukoulas (aptly called The Kook) did some research.

Japanese house prices are identical now to where they were in 1984.

If Australian house prices were back to those levels they would be:

Geez Louise… I would load up on property at those prices. Wonder what the equivalent rent returns are?

In crypto terms, Bitcoin had a steady week. Trading at $57.6K USD. Aussie holders have had more gain from FX movements that BTC itself.

In Australia, crypto is getting a lot of media coverage.

Firstly, CBA came out and said they will be partnering with a platform to allow their customers to buy crypto from early 2022.

Then, the head of payments at RBA called for more crypto regulation before the inevitable crash.

Players in the crypto market responded. Their views was that whilst the RBA may wish and hope it will all go away, it just won’t. Central Bank Digital Currencies are on the horizon and they should just fuel demand.

Most agreed though that once you get below the top 20 crypto’s by market share, you are playing in dark and murky waters. 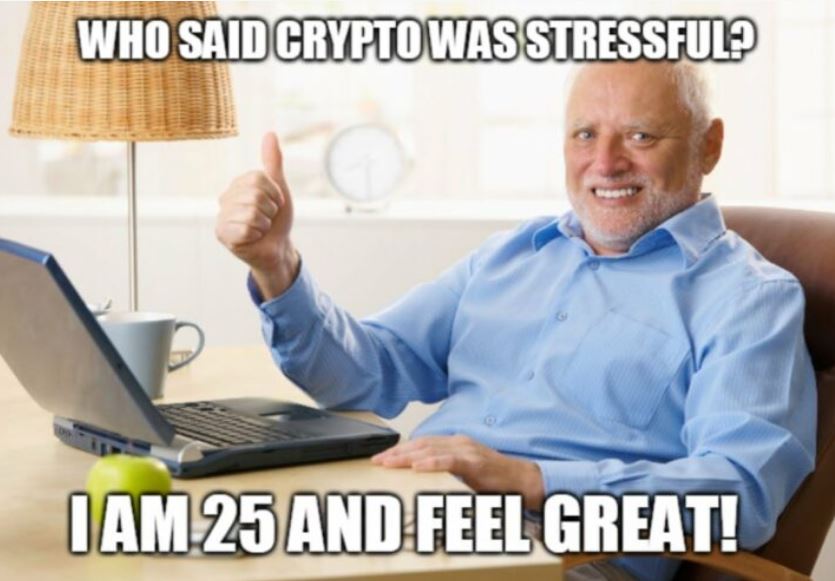 Which is exactly what we are looking to do here at Incognito Markets.

We are looking to establish our own PPP – Ponzi Pumpers Programme.

Without research we will invest a $1,000 a week in the winning ponzi.

Whilst not limited to crypto (we will back a Nigerian Prince as well), this week we will put two suggestions that have come into the editors desk.

We can’t do anymore research or the rules are broken. Results released next week.

Anyway… for those readers that are all in, good luck.

I think I met this guy at a recent golf day…

Inflation up but gold down. Not everything that is shiny is gold.

Pepperstone are bullish on gold in AUD terms ahead though.

To be fair, I’m highlighting a 44 minute YouTube clip that I am only half way through watching myself.

But I was intrigued since their ‘guest’ was Katusa Research – a guy I have been following for awhile.

Watch as you wish – but it kicks off with a claim that carbon credits may give you a better return than crypto in the next few years. Bold claim.

General theme is that fossil energy producers will have no choice ahead but to buy credits.

Chart below is funds under management. Does look a bit crypto.

Given Peta Cretin and Tony Abbott destroyed a perfectly good carbon trading scheme, we don’t really have much to invest in here.

I did find an offshore EFT that looked interesting. Krane Shares offer a mix of North American and European cap and trade programme investments – code KRBN. I haven’t invested yet but keen to look a bit deeper.

Back to familiar roots.

Drank it with an out of towner al-fresco.

Colour: Dark cherry red with a mauve hue.
Nose: Dark raspberry fruit, floral potpourri and with a hint of Turkish delights and a subtle malty oak note. Remarkably poised and fresh with interesting mineral, quartz stone complexity.
Palate: Textural palate with rich round tannin and piquant acidity with a touch of light soy. Focussed dark fruits, brightness and integration with oak. Excellent length and poise for the cellar.
Potential: 4-12 years, longer in a cool cellar. Decant on opening and allow to breathe if possible for a couple of hours.
2013 Vintage: A classic vintage with all the great hallmarks of McLaren Vale.
Northern Exposure Grenache, 2013

It suggested we decant it for a few hours. We gave it two minutes to breath.

A very good, well balanced and well made wine. $70… and I bought it…

The bands name reminds me of a colleague’s buck show travel experience.

Saw the song on last weekend’s Rage. It has been around since 2007, but as the DJ’s would say – still sounds fresh.

I wouldn’t put a meme in just for a tawdry cheap joke, but Mrs Swan actually has a couple of concrete hens, so too good to miss. Refer above for a likely response….