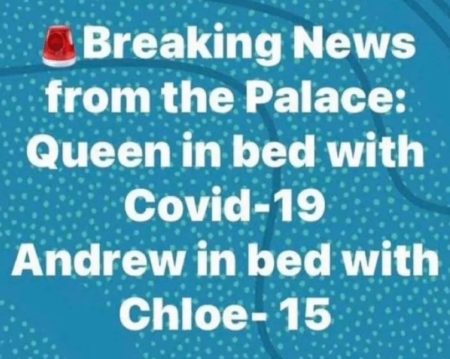 Ukrainian conflict has been well covered by msn as well as social media. I’ll touch on the market effects, but very much aware there is a far bigger humanitarian crisis unfolding.

I was sent an article that put forward to preposition that the invasion is not really a ‘black swan event’ because it was far from being unpredictable or even unlikely.

Alexander ‘nation builder’ Downer doesn’t concede he may have got this wrong, just that Putin has stuffed up.

There is a big question (fear) as to how far Putin will go to achieve his vague and unspecified objective. He would have certainly factored in some Ukrainian resistance, and the usual tough talk and sanctions from the West. But President Zelenskyy has played his role better than would have been expected. He has been able to rally substantial support and almost unified condemnation of Russia, excluding maybe from India and China.

India have 1.5 billion people to feed, and Russia is a massive food bowl/exporter. Maybe they have some reason, but no ethics.

But Russian global economic dominance is certainly not that of say China. They rank 11th in the world and as can be seen below, roughly equivalent to Stella Artois. We are at 13th if you wondered, propped up by our coal/iron.

Even the perennial bipartisan, Switzerland has jumped in the ‘freeze Russian assets and make life tough’. There are long queues lining up for cash withdrawals in Russia. The squeeze is on. The Ruble is about 35% lower now against the USD.

USD as the safe haven currency got a lift, and Euro/UK currencies fell as they will be most impacted.

I did read an article that maybe this would be a catalyst for China to seek a move away from the USD as the global benchmark currency.

I don’t agree. It has been argued before but there is no sign to indicate this will happen anytime soon.

Of course Russia ‘needs’ money and with its overseas assets not available, the large amount of gold assets it owns and stores domestically is one source.

The other is (I’m told) an undisclosed amount of crypto. Some of this gained with legitimacy, some not so. It is estimated that Russia ‘earned’ some $400 million USD last year alone from Ransomware take downs – most paid in crypto. Of course that would not be government sanctioned activity…?

Russian Central Bank is crapping itself. With the Ruble plummeting and inflation likely to go through the roof, it hiked official cash rates from 9.5% to a lazy 20%. All this will hurt, in time. Ukraine may not have that time though.

Outside of Russia, global interest rates fell, as the conflict is not a good thing for international trade and growth. As mentioned last week, this may give the FOMC a ‘get out of jail’ free card. Still a chance of a cash rate hike from the Fed this month, but now probably only .25%. Canada doubled it’s cash rate this week, albeit from 0.25% to 0.50%.

US 10-year rates falling, as are ours.

Other initial market reaction was to push all commodities higher (oil and gas in particular). Crypto plummeted initially, as seen below. Broadly all crypto’s have come back strongly though and BTC now up 20% on the month.

Not really funny, but it was great to see the local farmer offering to tow a Russian armoured vehicle from Ukraine “back to Russia” when it ran out of fuel.

And as always, cyclists can find a way to annoy everyone.

Our RBA kept the cash rate unchanged for the 17th straight month. The Russia/Ukraine issue has put more uncertainty into their world, so rate hikes could be deferred. The counter argument however is that inflation looks more likely to head higher from here, not lower.

Pointing towards robust growth and maybe the need for earlier RBA action, Q4 of 2021 GDP was released showing a 3.4% gain for an annual rate of 4.2%.

Covid and lockdowns has seen this data all over the place but it appears to be back now above pre-Covid trend.

Consumer spending was a big driver of the solid result. Consumer savings levels have come off a bit but is still well above historical norms.

Farmers are having a bumper season (effects of floods unknown as yet) and volumes are up, as are prices. They should be pumping up GDP for the next few quarters. Speaking of the east coast floods, I’m told this is a real ‘before and after’ photo of the same golden arches. Scary.

Spending should support GDP further into 2022. On the other side of the ledger, cash held by companies are also well up. You would think this would help shield them somewhat from higher rates, and also maybe encourage increase investment spending.

I remain a little bemused by ‘real market’ money, reflected by forward bill rate levels to be much higher than bank forecasts. Then you see all banks huddled around the same level like sheep (or afraid to be a wrong outlier). ANZ was the noticeable low baller though. I checked with my ANZ contacts that tell me, that is old now, and current predictions are for .75% cash rate by the end of this year and 2% by the end of next year. Closer (but now higher) than the bunch.

So, all in pretty rosy market picture at least.

My Bear Fund hedge holding is doing very poorly… which is great. Pink dots are my entry points. It falls when the equity markets are rising, so my portfolio is doing what it should. 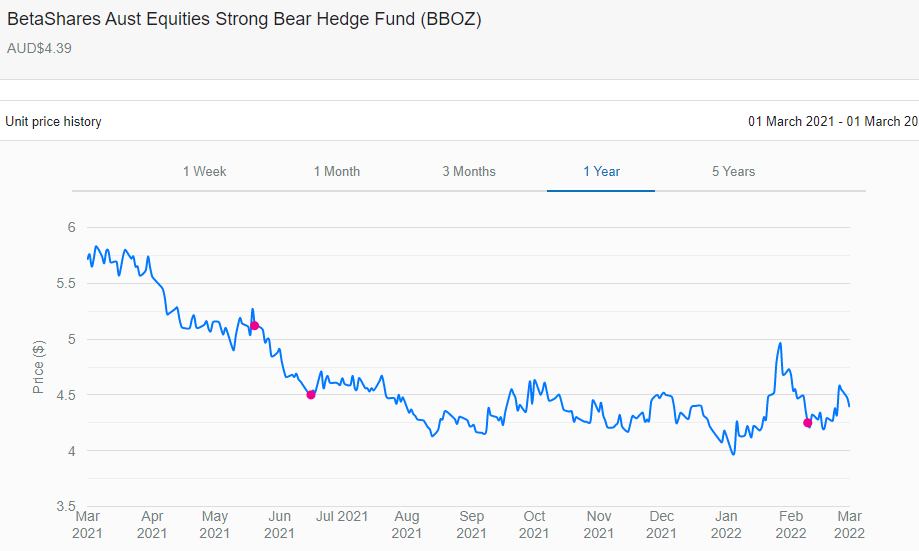 Nothing of note (no pun intended) strikes me.

As mentioned last week, the Aussie dollar is benefiting from being a commodity currency and strong GDP data.

It is just under 73 cents this morning and most have it heading higher. I believe it will – but not likely to hit 75 cents. If I was an importer, I might see this as a good time to add some cover.

Oil remains the big mover at circa $110 USD a barrel.

I mentioned only last week that I had bought smalls into an Aussie lithium miner, Core. This week it signed an agreement to supply Tesla with lithium for the next 4 years. Share jumped 17 percent. No guarantee I can do that every week.

I saw Barnaby Joyce on TV this morning, and he was sober!

A good war is a positive for incumbent governments, but for what it is worth, Sportsbet still have the Coalition at 3.20 outsiders.

One commentator said recently that they felt the current government just seemed tired and bereft of ideas. If you put the lies and morally corrupt behaviour to one side, I think that is a fair comment.

Of course the QLD and NSW floods may also put the spotlight back on the Federal Government’s “Don’t look up” approach, to sit back and assess.

Statisticians of course will say a one in a thousand disaster just means there is a 0.1% chance of that disaster happening in any given year. It is possible to have two of them back to back.

I was certain it was a total pisstake, but Peter PotatoHead Dutton starting up a GoFundMe page for the QLD floods was 100% real. What would ever make a Federal Defence Minister (with access to $4.8 billion in disaster relief funding) think this was a good plan.

I have seen some of the donors… comments are gold. 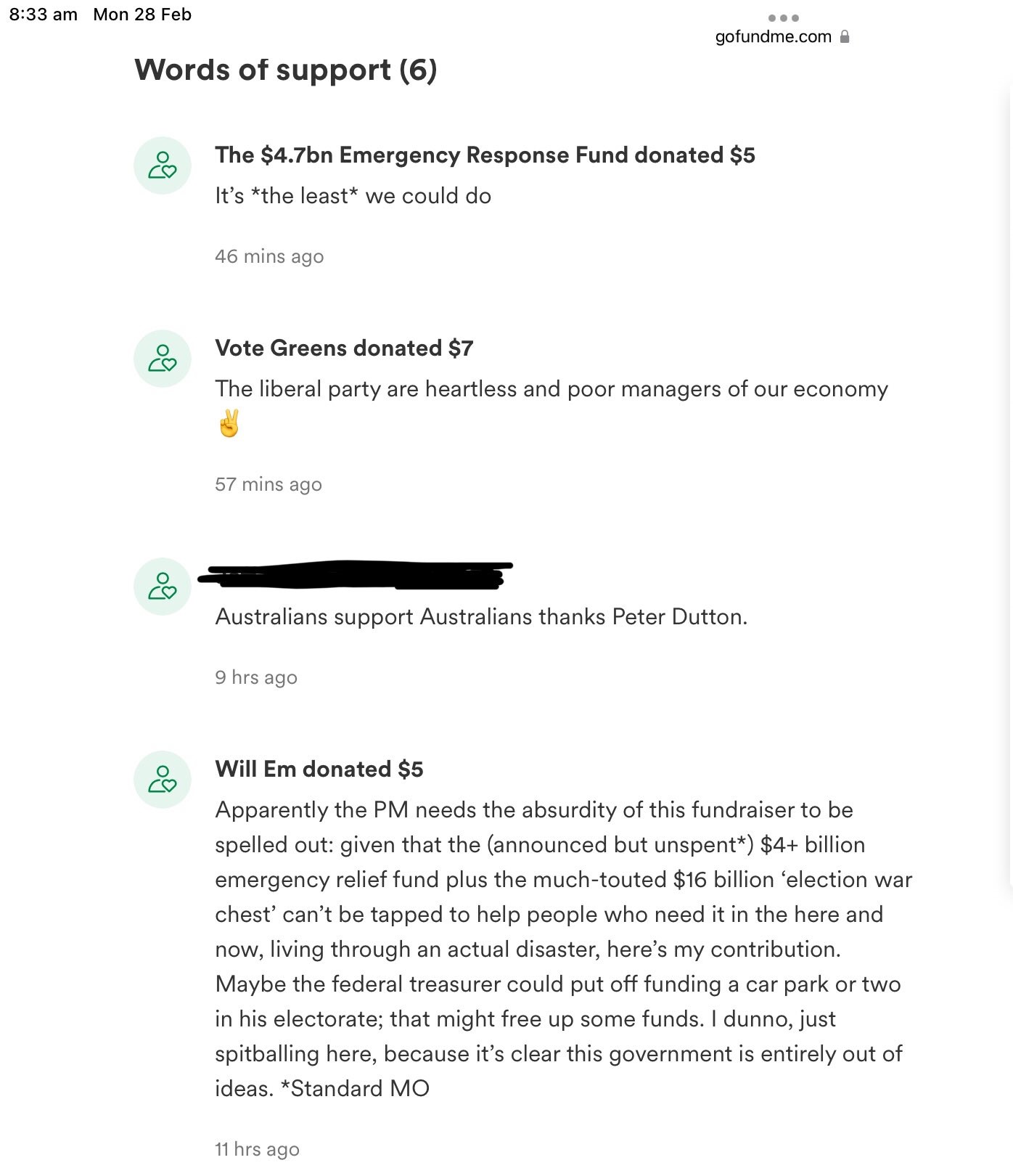 Barnyard did say Scotty was coping with his Covid case well, and still fully functional (I doubt the second part unless it has improved him). Anyway, best of luck to him.

Market still strong, but signs continue that the top may not be far away.

AFR had the chart below. It might explains why Wesfarmers (Bunnings) see a slowing in sales ahead too.

I have read more articles in the last two weeks than ever before on crypto vs gold as a safe haven asset and store of wealth.

I’m an old swan, but I would be concerned if I was a Ukrainian millennial with my wealth tied up in crypto but no access to the interweb to get to it, or if I do, how do I convert to consumables?

Whilst the same may be true for a bar of shiny gold under the bed, at least you get to pat your ‘precious’.

The strong bounce in crypto though says that either momentum for the asset class is not as frail as I had predicted, or a lot of people do believe it is a safe haven/store of currency.

Meanwhile, my gold holdings are doing ok. Pink dot was my entry point: 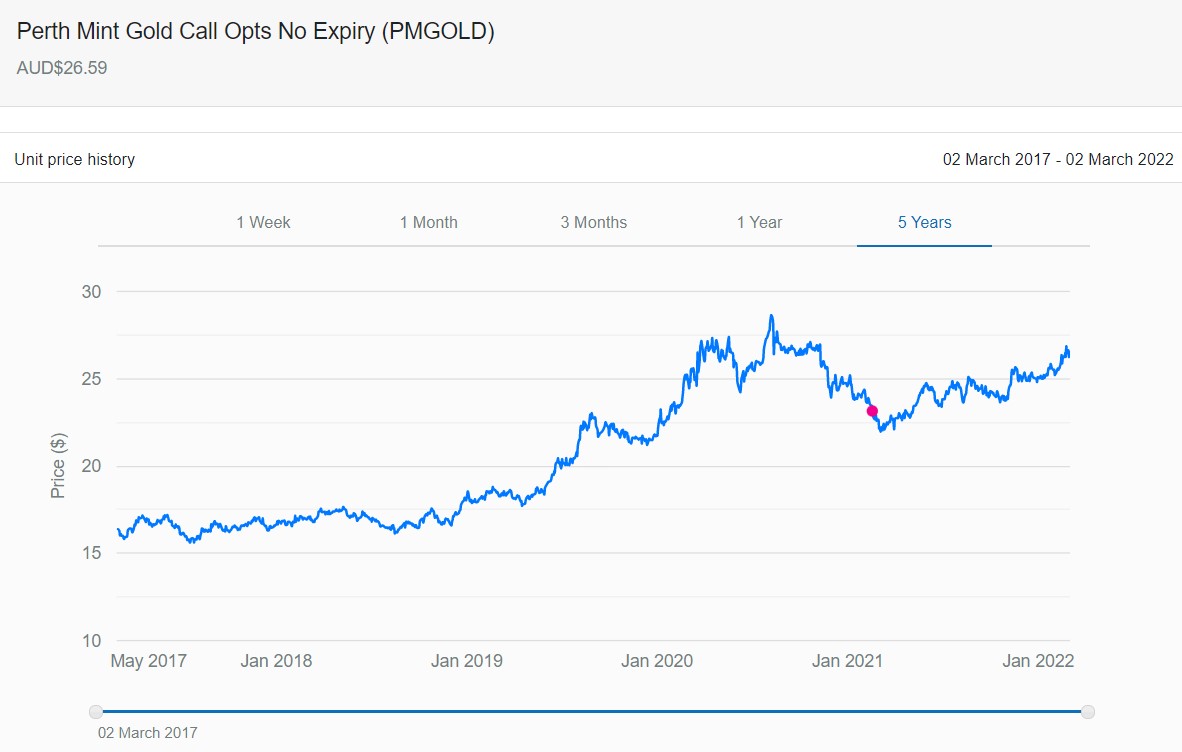 Not really related, but a cargo ship transporting 4000 Porches, Bentley and Lamborghinis has sunk in the Atlantic after it caught fire. A mate tells me it was an electric battery that caught fire in a container, but I can’t find any confirmation of that.

No change in the AGL bid yet.

Thought of the week: Why?

A tad sexist these days but:

Not expensive – circa $25 from bottle shops if you can find it.

They say: “This wine uses fruit sourced from the King Valley and combined with favourable growing conditions has produced an incredible yield of fruit that is full flavoured and full of texture. The Pinot Noir has bright, red berry fruit aromas while the flavours are of fresh fruit, the tannins are supple yet the acid is lively. This style of wine is made for early enjoyment, enjoy with barbecued pork, lamb chops or chargrilled vegetables. The Geppetto range features classic French grape varieties designed to drink young at a price that won’t break the bank.”

We paired it will hot pub chips.

Our editor is a vegan, so below may never see the light of day… 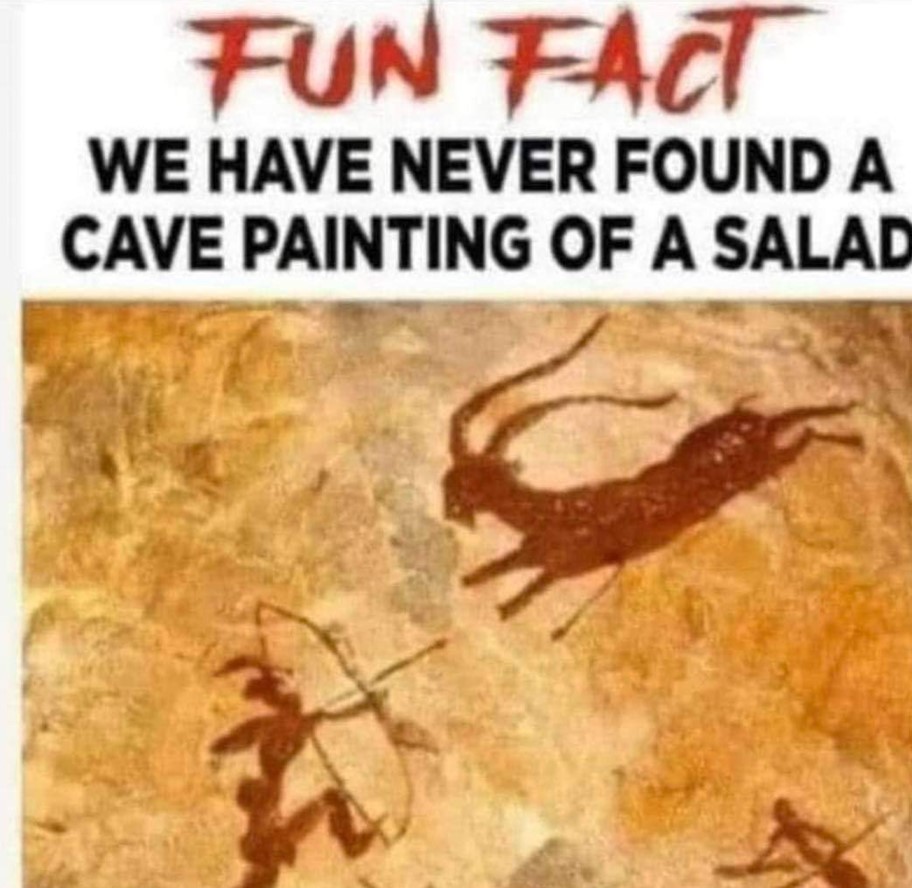 Black Swan is climbing a mountain interstate next week to meditate… and drink.

No report until, or if, I return.