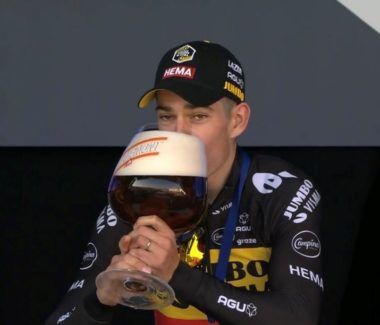 Firstly, a slight change in format this week, but little change in content. Give us feedback.

Be careful… not all Black Swan’s are the same.

This bloke claims the end is nigh.

I disagree, but see the risks of nasties appearing are no doubt getting bigger and the timing seems to be shorter.

That said, I did predict a pull back in late 2021. Yes, there was negative equity movement in January, but that was largely picked up again in February.

Warren Buffet (geriatric guru) is holding about $144 BILLION of his Berkshire Hathaway investors $700B in cash at present. He claims to be having trouble finding value in any equities at present. I also suspect he may be setting up to pounce when the hammer comes down.

Big Dog USA is hyperventilating at present. The yield on US 2 year bonds were briefly higher this week than 10 year bond yields.

Big deal you may say and shrug, but that measure in purple is usually a very accurate predictor of imminent economic pain. 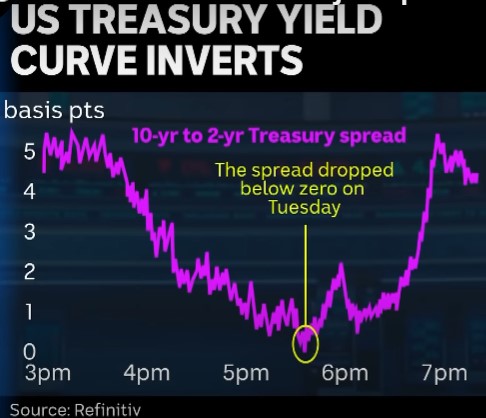 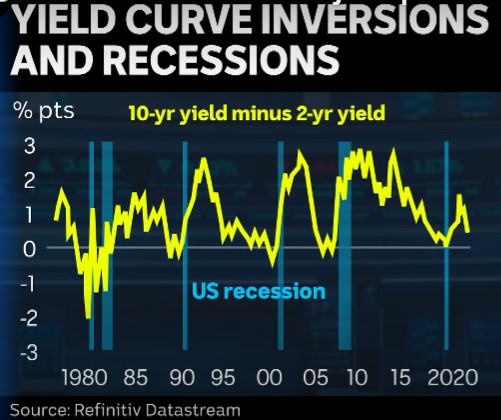 The thinking is that the US economy is like the jet below. Higher business activity leads to inflation which leads to cash rate hikes – the jet takes off. Business and consumers get strangled by the higher costs and the economy stalls – the jet ‘lands’.

I have fought for decades against the numpties that claim “this time is different” – I fundamentally live by the ethos of mean reversion to ‘norm’.

But here it goes – this time is different.

Firstly, treasury yields have been artificially ‘corrupted’ by Central Bank bullying. Quantitative Easing’s (and soon to be Tightening’s) change the raw market demand/supply equation. Think, for example, the RBA holding 3 year treasury yields artificially low from 2020 into this year, when they finally gave up.

Secondly, look at the pace that short end (cash) rate expectations have changed. Somewhat egotistically, the chart below shows World Interest Rate Probabilities, albeit the US Federal Reserve.

Likely cash rates obviously have a closer impact on 2 year yields as compared to 10 year yields.

The cash rate expectations are clearly responding to inflation fears and that the Fed is “behind the curve”.

As we mentioned some months back, sometimes the expectation (fear) of what may be ahead can in itself change the course of history.

Peter Atwater of Financial Insyghts can maybe put it better than I:

“Maybe it is just me, but I feel like we have seen far too many charts shaped just like the one above lately. From meme stocks to lumber to wheat there is a pattern of wildly accelerating impulsivity that seems to define current investor behaviour. That that same unbridled impulsivity now extends to policymakers is hardly a surprise, too. As sentiment following experts, monetary policymakers are behavioural shadows that mirror the crowd’s wildly swinging actions.”

He suggests that rate expectations will shoot down as swiftly as the price of meme stocks or timber futures before them.

Inflation is not limited to USA, but they do seem to see it before us. Fertiliser costs are the latest commodity to be charging higher – a mix of supply chain issues and Ukraine/Russia issue.

Russian invasion continues. Pictures of burnt out Russians tanks are all over the media. Below highlights that they have plenty left to send in, though:

Floods again on the east coast – everybody’s hearts go out to the people affected.

The Federal Budget was supposed to be the last chance for the great Coalition reset before the May election.

“2022-23 Budget takes short-termism to an extreme, with its centrepiece – a temporary cut to the fuel excise – something which wasn’t really on the agenda more than three weeks ago. A missed opportunity to set out an economic vision to say the least!”

I would agree with that broad assumption. Spending money like ‘drunken sailors’ was one claim. Not sure how that sits, but they allocated less forward spending to climate and the environment, less to public education and none to any future integrity commission. Not sure they are really listening to the electorate.

I have pointed out to a few people though, that it appears the Coalition still believe they are a chance to retain office – otherwise they would have placed a few poison pills and grenades into the Budget. Unless they hid them really well, I can’t find them.

I query their expectations of inflation rates ahead. 3% for June next year then dropping into the high 2%’s.

Of course wages are forecast to rise above that rate by a small amount – despite not achieving that in past years.

I get the feeling that wage rises are coming, and perhaps strongly. But only because of labour shortages and my other feeling that inflation may remain high for longer too.

On labour, it was very interesting that the Budget assumes 180K increase in migration next year and 220k the following year (we went backwards by 90k last year). They are high numbers. Safe to assume that will impact unemployment numbers and potentially keep wages lower than otherwise. House price increases could be another factor.

And was the cash splash necessary to keep the economy ticking? Retails Sales figures just released show the monthly spending is well above pre-pandemic levels.

Households (generally) are so far concerned – but not worried.