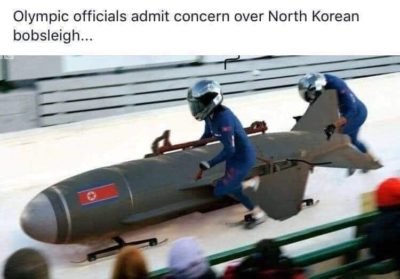 Like a crocodile lying in wait for a gazelle to cross the water, I have been hit with too many targets this week.

The stupidity of the market is matched by politics here and abroad.

The big data this week was US inflation. As we all know, it has been on the rise for some time now. January was forecast to be 7.3% but it topped that at 7.5%.

The Federal Reserve seems to have hit the panic button (finally) despite a growing numbers of punters that think ‘base line’ effects of big hikes in a few categories (e.g. fuel) will see inflation calm down in coming months.

Pepsi have raised prices by 7% and Coke by 10%, and flagging more rises might be ahead.

As a very interesting aside, the battle between Pepsi and Coke is well known, but did you know that in 1989 Pepsi had the sixth largest naval fleet in the world?

How it got to that is worth the 5 min read:

How Pepsi Came To Own A Soviet Naval Fleet

The market is pricing in 99.6% probability that a 50 bps hike will be delivered next month.

We covered the historically low velocity of money in the USA previously – plenty of cash around, but no one was spending. Just paying off debt, saving or buy crypto/NFT’s. It is early days yet, but signs are that with inflation, the velocity is increasing. Makes sense. If the item you are thinking about buying is expected to go up in price soon, you are more inclined to buy now than wait.

Rising yields are not just unique to the USA though.

Even Japan that has had a comatose bond yield for decades, appears on the run.

If you look at Australia, the 2 year bond yield has risen more than 70 bps just in the last month. If you looked at that in isolation over the last year you would be really worried, but as the chart shows, it is just back to where it was pre pandemic.

RBA Lowe spoke to a Parliamentary Testimony today. He again refused to put tight timeframes on rate rises, and I could clear the current Federal Budget debt if I got paid a dollar for every time he used the word “uncertain”. The chart tells me though that players do not believe he can wait until 2024 to hike and will start later this year.

Interestingly, he was asked where he saw the ‘neutral’ rate to be (the Goldilocks level). He hoped it would at least get back to zero in real terms. If inflation runs at Goldilocks’ level of 2.5% then that would be the RBA cash rate. Wanting Goldilocks and getting it is two different things though.

As we point out regularly, RBA want (and seem to be demanding) wage increases before it taps the brakes.

You would think that Lowe must be happy that he is with RBA and not FOMC – we are ‘on top’ of things are we not?

I did read an interesting reflective look back to late 2008 though. Aussie inflation running at 5% and getting higher. RBA had sat on their hands too long and were in a real pickle. ‘Luckily’ for them, the GFC hit and Australia entered the slow down with a huge monetary buffer. Labor’s fiscal response is often seen as Australia’s saviour over that period, but perhaps more so it was the pure luck of RBA procrastination.

It can’t rely on that sort of’ ‘luck’ every time.

Let’s hope when the brakes get tapped it is as safe a landing as this little beauty:

Of course all predictions become null and void if Putin sends troops into Ukraine.

If you count AMP as a bank, it had a pretty good result. Troubles will continue ahead, but there is a pulse. Mortgages grew 16% QoQ (annualised). They also claim to improved loan approval time to an average of 5.3 days. I would like to know how that is measured because I haven’t heard too many stories of customers being stunned with rapid loan turn-around times from any bank.

NAB was probably the pick of the bunch though, with very good first quarter results. McEwan’s “keep it simple” mantra seems to be working. They are growing balance sheet well in Retail and Business. It looks like some of the other players are buying market share by sacrificing margins. Quarterly margin compression was 4 bps for ANZ, 9 bps for CBA and a whopping 10 bps for WBC. NAB lost 2 bps.

NAB share price has been strong in the last few weeks and $30 a share seems within reach. This pains me no end, as you may recall I went bearish banks mid last year and lightened my load of the Death Star.

Whilst on my portfolio I added some additional strong conviction (leveraged) PUTS into my portfolio this week. Not huge just a top up via BBOZ.

Speaking of death (and in poor taste):

Aussie dollar is dead set boring at the moment.

Sitting (again) in the low 71 cents, it has really been very range bound since June last year.

FX Street poll see a slight downside bias over the next quarter:

Hard to disagree. With the US Fed committed to hiking rates and Australia on the steady as it goes course, the USD should move higher and liquidity flows to follow.

I bought some small amount of lithium stocks (CXO) this week. May have missed the initial big run, but feel there is more to come on EV demand.

No end of subjects, but as I hinted last week, I’m just fed up with it all. 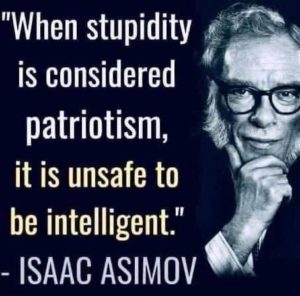 You resign as Premier under an ICAC investigation then get your nose deep into the corporate trough. Optus is thrilled to invite Gladys onto the exec team because she builds and fosters teams that go above and beyond. Interesting appointment since ICAC may yet find she went above and beyond the law.

Morrison would obviously be an easy target this week – he and his team has had a shocker.

I remain fearful that broad apathy and self interest may yet see this rabble returned, but it is starting to look ever less likely.

But it is as much the system itself as the players. I am starting to look at the UK/USA and here and think that the current two party system is just so broken that it needs to be rebuilt. 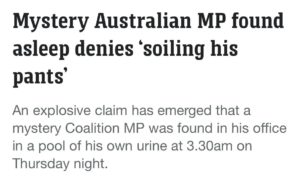 Given the shit show that has been politics since 2018, you can only imagine the percentage of dissatisfied increasing in 2022.

I am lucky that I’m in a Federal seat that has a very moderate/centered Independent candidate.

I thought there were a number of countries that operated a democracy very well without a two party system. Appears none of any great size though – a few Middle East countries and a bunch of Pacific Islands.

The Romans and the Greeks were the last large entities working a non-partisan democracy. The Greeks all got to vote of legislature while the Romans had non factional representatives (that ultimately became factional).

In our world where the ruling party or opposition present policies that will not be supported no matter how good those policies may be, is there a better way?

Maybe the best recent example is Ireland. They have assembled four citizens assemblies – made of 100 random people to discuss big issues like same sex marriage and abortion rights. After deliberations and recommendations, a proposal is put to the broader population via referendum. Three of the four proposals have been successful.

It may be be expensive, but so is pork-barrelling (aka misallocating public monies) and corruption. I wonder, for example, what our environmental policies may be under this system?

As George says – think for yourself. 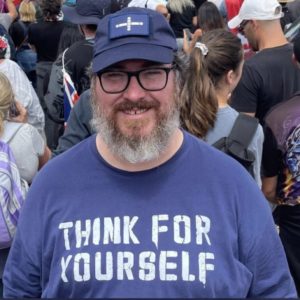 Finally, whilst this is the SA Premier, I wonder if Scott has seen the movie too? 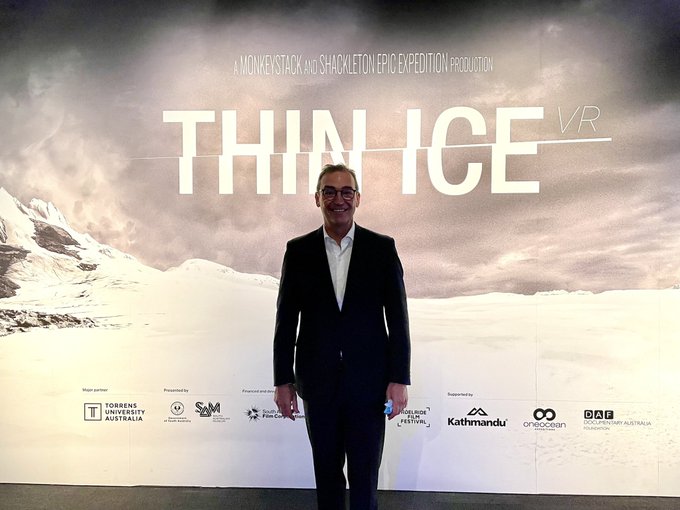 Signs of moderation are talked about, but every open inspection needs a car park attendant and a sausage sizzle.

Gold is dragging itself higher, especially in AUD terms. I bought my gold stocks this time last year. They are up over 10% which is okay for an asset with a lot of critics.

Most crypto’s had a fair to good week.

If, like me, you think Bitcoin is purely a momentum play, it feels like the froth and FOMO is waning a tad.

Hard to accurately gauge real volume traded, but the white line below proports to show trading transaction volume. Not falling off a cliff, but not growing.

ON the upside, my investment in stupidity is looking better.

Ripple XRP had some good news on its legal defence against the US SEC last week.

My young cygnet sent me this one:

Nothing of great note other than my lithium buy.

Thought of the week: The Lucky Country.

A mate of mine despises me using the term – he thinks we have tickets on ourselves, and from the rest of the world’s perspective, we are a cultural and economic backwater.

I disagree and after the fifth beer we agree to disagree.

I can’t then show him the results of a recent Australian Government Treasury Working Paper titled REACHING FOR THE STARS: AUSTRALIAN FIRMS AND THE GLOBAL PRODUCTIVITY FRONTIER

Maybe ScoMo wanted some ammunition for how smart Australian business is.

It hasn’t found that at all. The summary of their findings:

“We find that the gap between global frontier firms and Australian firms has grown over time in the non-resource, non-financial market sector. Moreover, Australian firms catch up to the global frontier more slowly than previously, suggesting slower adoption of cutting-edge technologies and processes. The slowdown has been more notable in industries with declining measures of dynamism and competitive pressures, suggesting the slowdown may reflect weaker incentives and imperatives for firms to improve.”

I first heard the term “rent seeking” a few years back. As an idiot, I initially thought it only applies to property landlords. It rather applies to any undertaking that looks to generate income without creating new wealth. Wikipedia used Taxi Licensing as an example – adds income (albeit to government) but adds no value to taxi services or delivery. If anything, it acts as a deterrent.

The report seems to show that we in fact punch below our weight in efficiency and productivity. The chart below is for manufacturing, but the trend applies equally to broader business and service sectors.

Our best is below global best by a long way.

As only good government papers can, it highlights an issue without any suggestions or recommendations to address.

Perhaps this alone explains why wages are not rising?

I would appreciate your thoughts.

I have an Aussie relative that lives in Munich. I say how lucky he is to get access to such great and low priced Pilsners. He has had a gutful and would gladly drink anything else.

Me – I love a crisp cold Pilsner.

This one is from a country brewer that has been around well before baristas’ gave up coffee for beer brewing in 2020.

They say: “Brewed in the traditional German style originating from Cologne in Germany. This is a light, dry beer with a clean crisp finish.”

I think Dan Murphy has it for online delivery. Summer day, thirst… you will not be disappointed.

I’ve been ‘on’ Nina Simone for years, but hard to encourage new believers that may see the style as too old hat.

Some may see it as sacrilege, but her voice remains smooth as treacle.